The fourth Pieter Vos book, Sleep Baby Sleep, is out in the UK on June 1 from Pan Macmillan, and in Dutch in October from Boekerij. I always try to write a different book in a series and this is no exception. Vos and crew’s last outing, Little Sister, was mainly in unfamiliar territory for them, out in the flat lands around Volendam.

Now they’re back where they’re at home, in Amsterdam, though this story will take you to places few foreign visitors find. We start with Vos labouring under a new boss in the police, Jillian Chandra, a fierce and ambitious woman who’s not fond of a bohemian detective living in a houseboat, doing things his own way and bringing his beloved dog Sam into the office from time to time. Vos has just escaped a long service ceremony and headed home to the Prinsengracht. There a curious note awaits him and, when he heads over the road to the Drie Vaten for a drink, Sam is abruptly kidnapped by a stranger in an odd hat.

What follows is a fast-moving drama in which Vos must try to disentangle an old case that appears to have come back to life, and set him on a series of baffling chases across Amsterdam.

Insults like these aren’t good for a man in Vos’s profession. He’s an ace detective specializing in homicide cases for the Amsterdam Police, and things are tough enough at the moment with Vos’s imperious commander looking to steal his thunder.

Three years earlier, Vos handled the case of a predator who drugged young women, then raped and murdered them. Now the predator is in prison drying of cancer while another predator seems to be doing a copycat version of the original rapist-killer.

Hewson, a writer of highly readable prose and a concocter of irresistibly creepy plots, mixes all the elements — including the taunting texter — into a first rate thriller.

These are crime stories so at their heart there needs to be a crime. In this case it’s the modern one of date rape. Four years before Vos believed he’d cracked a homicidal date rape gang responsible for what the media had dubbed The Sleeping Beauty Murders. But to the dismay of his new boss it seems one of the gang may have escaped… and be back in business.

The hunt will take Vos across the city, to the extraordinary cemetery of Zorgvlied, the new financial district of the Zuidas, the wonderful city zoo Artis and, above all, the bustling street market of Albert Cuyp in De Pijp.

It’s in the market that I hope I’ve introduced a secondary, human element to the story. Here a flower trader, Bert Schrijver, is struggling to keep his head above water as the area where he’s grown up changes in front of his eyes. De Pijp is a working class district turning hipster, very much like a Dutch Shoreditch. Schrijver is not a man who can cope with new faces, new businesses, new challenges in front of him. His business is on the brink of bankruptcy, his wife has left him, and to make matters far worse his daughter Annie is, at the start of the story, victim of a vicious attack in which a man with her died.

Bert is the first to admit he’s not a smart man. All he wants to do is what’s best for his family. But as the story progresses it becomes clear he really has no idea what that might be. Though the solution he comes up with is not one I suspect people might foresee, Bert included.

I spent a happy few visits to Amsterdam researching and thinking about this book. You can see some of my photos from that time below. If you find yourself in the city and want to discover some of the sights you’ll find they’re all easily reached. The Albert Cuyp market is now a well-known tourist destination not far from the museum quarter. It’s a noisy, bustling place, with some lovely street food. Make you try some of the fish there such as raw herring and chunks of fried cod, kibbeling. Since I stayed in the area I saw the other side of the market too — the deserted street of early evening when bands of herons stride around the parts where the fish stalls were, hoping to pick up a few scraps.

Artis, a key location in the book, is both a zoo and a scientific institution set in gardens in the suburb of Plantage a short tram ride from the centre. The butterfly house is quite something.

Perhaps the most extraordinary location, though, is a corner of the Zorgvlied cemetery. This is set by the Amstel river, next to the lovely Amstelpark. Mostly it’s a serene, well-tended graveyard, but the book takes you to one part an author couldn’t make up: Paradiso, a kind of hip burial ground full of mementoes, odd statues and very strange monuments. From here it’s easy to walk round the corner to the Amstelpark or carry on down the broad, slow river where soon you’ll find yourself next to quiet fields where cattle graze. It’s hard to believe the teeming centre of Amsterdam is just a few miles away. This is an extraordinary city, and as always it’s been a great privilege — and enormous fun —  to bring Vos and his colleagues to life there. 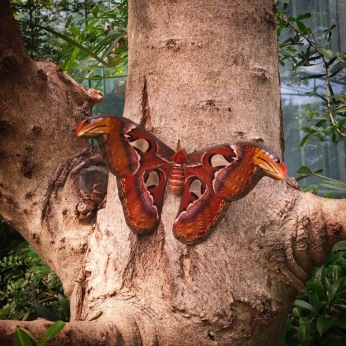 Inside the Artis zoo

Inside the spectacular Artis butterfly house 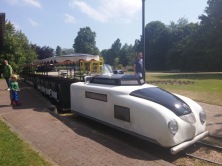 The train at the lovely Amstelpark

Fast food in the market

The new financial district emerging at the edge of the city 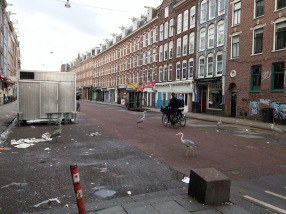 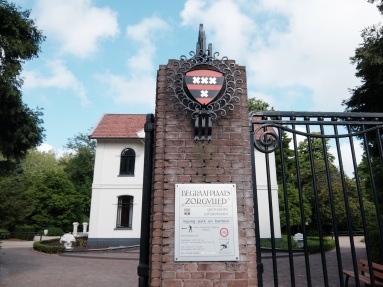