Arthur Brooke, author of the poem which Shakespeare used as the basis of Romeo and Juliet, follows his original Italian sources in stating that the story really happened. He ends his verse with the claim that the tomb of Juliet and her knight still stood in Verona and was much admired. This is pure fancy. There is no record of any family called Capulet in the city. One called Montecchi — perhaps an Italian Montague — did exist but they were expelled in 1229, long before anyone began to write about two star-cross’d lovers.

Romeo and Juliet are fictional characters through and through. None of this stops millions of tourists visiting modern Verona to gawp at the famous house in via Capello — so called because it once belonged to the Da Capello family, the nearest anyone can get to ‘Capulet’. This building may date back as far as the 13th century but most of the features visible today date from a heavy restoration in the 1940s, including the much-photographed balcony which was probably a sarcophagus before the town council of Verona decided to stick it halfway up the wall. Quite a few visitors also make the trip to the former convent of San Francesco al Corso to pose for selfies by her supposed stone coffin, below, though in truth the place is much more interesting for its works of art than something that was once used as a simple water trough.

Does it matter? Not really. Stories are sometimes made as much by the imagination of audiences and readers as they are by that of a playwright or author. If enough people believe a myth to be true, is it really still a myth?

It’s impossible to separate the tale of Juliet and her Romeo from this ancient city in the Veneto. So I have set much of this narrative in places you can still see today since the historic centre, set behind its walls in a bend of the Adige river, is recognisably the Verona of five hundred years ago.

The social centre is where the first scene takes place — the market square, once the Roman forum, now the Piazza Erbe, where the servants of Montagues and Capulets are spoiling for a fight. There are still market stalls but mostly they’re for the tourists these days. But in and around the piazza you’ll still find plenty of interesting streets and palaces hidden away.

Another key location is the imposing basilica of San Zeno, one of Verona’s most impressive sights, a fifteen to twenty minute walk away from the Piazza Erbe. The embalmed corpse of the saint himself, which so appals Juliet, remains there sixteen centuries on from his death, visible in red robes in a glass casket in the crypt. Above the main doors is the famous rose window with its wheel of fortune characters around the circumference.

Sant’Anastasia, the Capulets’ parish church is little changed, though its most famous feature, the extraordinary Pisanello fresco of Saint George and the Princess with its hanged men in the background, above, has suffered over the years. Around the corner runs the low colonnaded street of Sottoriva where Romeo has his fateful meeting with Tybalt. Today this is a quiet place for restaurants and local shops. But in the period in which the story is set it was a rundown area of brothels and suspect taverns.

Back towards the Piazza Erbe lie the central monumental buildings of the city, and the curious raised tombs of the Scaligeri clan where Romeo meets Mercutio and Benvolio before the Capulet banquet. The tombs are an odd corner in this monumental part of the old city, scarcely grand and now fenced off from the public. Next to them the little church of Santa Maria Antica is well worth a visit for its intimate interior and the relics of the family that once ruled Verona.

The statue of Cangrande above his sarcophagus over the church door, grinning on his horse, a dog’s head mask on his back, is a copy. The original you’ll find in his castle, the seat of Escalus in this version. As Mercutio notes, it’s unlikely Cangrande was smiling when he passed away in 1329 since rumour long had it he was poisoned by a relative. In 2004 a post mortem was carried out on his remains and it was discovered he died of digitalis poisoning, perhaps at the hands of his nephew. 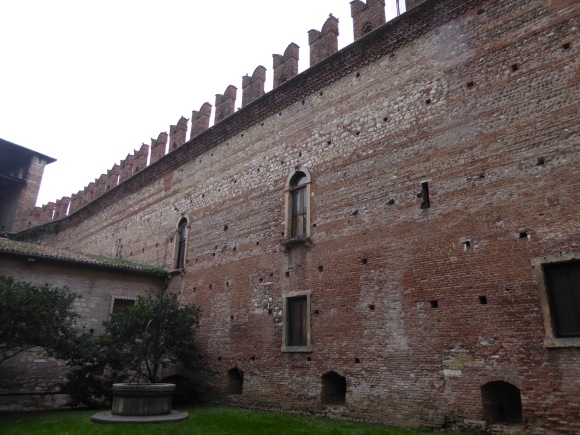 Today the fortress is known as the ‘Castelvecchio’, the old castle. But to the players in this tale it wouldn’t be old at all, so in the story it’s called simply Cangrande’s castle. The red brick swallow-tail bridge over the Adige which Romeo rides across is a popular place for evening excursions and a very lively market at times.

The building itself has been converted into a museum and art gallery — the painting of the girl with her charcoal drawing of a stick figure seen in Juliet’s bedroom can be found there again after being recovered when a bunch of thieves stole some of the museum’s most admired canvases. The Roman arena, where the three youths meet after the banquet, is no longer a haunt for prostitutes and vagabonds but a tourist attraction used for operatic performances that attract music lovers from all over the world.

Here’s a map to put it into a little context. Click on the icon in the right hand corner for the big version and you can walk the streets thanks to the magic of Google.

Shakespeare doesn’t state when his tale is set, though usually it is assumed to be in the early fourteenth century when Verona was still an independent city state. I’ve placed this version very deliberately in July 1499, a time when Italy was in a feverish mood of excitement due to what we now call the Renaissance. By that time Verona had become part of the Venetian empire.

For me Romeo and Juliet is very much a story about ambition and aspiration. The two lovers want to be free to be themselves. Juliet, in particular, is desperate to throw off the social shackles that mean a woman is a lesser citizen, a possession to be sold by her family in accordance with the social and religious mores of the day.

In 1499 Italy was divided into contentious, occasionally warring city states, not a country at all. Religion was a source of bitter and occasionally bloody argument. The Catholic Church under the Borgia Pope was headed for the split that was to form Protestantism, led by clerics who opposed the corruption and debauchery of Rome.

Count Paris is newly arrived from Florence which has just seen the brief rule of the Dominican friar Girolamo Savonarola, a forerunner of the Protestants, a hardline ascetic who controlled the city for a little while, and brought in the Bonfire of the Vanities, only to be burned at a stake himself when he fell. In the east the Islamic Ottoman empire was rising, threatening to invade Christian Europe and engaging in a running war with its nearest western neighbour, the Venetians.

At the same time art and culture were flourishing. In Venice the printer Aldus Manutius had invented the technology to mass produce books cheaply, bringing reading and learning, something previously restricted to the few, to a wider audience. Michelangelo and Da Vinci were constantly crossing the borders between art, philosophy and science, while Machiavelli was plotting to set out the principles of his version of modern statecraft in The Prince.

A new century was just a few months away, with it the start of the second half of the millennium. It seemed an apt moment for a story about two young people who wish to shrug off the stifling world of their parents and explore the brave new one emerging around them.