The launch of Romeo and Juliet: A Novel is fast approaching so it’s time to start sharing some background material. First up… a few real-life locations you’ll find in the narrative, some of which were previewed on Twitter earlier. I took these photos in February 2015 when I was starting work on this story.

And beneath you’ll find a map of the locations. Click the icon in the top right hand corner to get a much larger version which I think will even let you walk the cobbles of Verona through Street View (though it’s not the same as the real thing 😉).

It’s been a long journey. We’re nearly there…

Mantua, where a murderer is exiled.

Portrait of a young girl, Castelvecchio

Sottoriva, where Tybalt and Romeo will meet.

Thieves and prostitutes roamed the Arena. 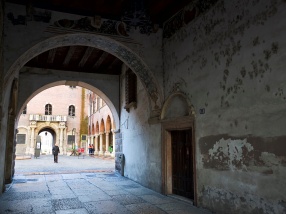 Lion of Venice rules over the Piazza Erbe.

The starry ceiling of San Zeno, a place for a young woman to lose herself.

Once the Roman forum, the Piazza Erbe is where the story starts.

The campanile where the Marangona bell tolls.

This bridge from the Castelvecchio was the only way out during times of plague.

San Zeno in the crypt

Cangrande’s sword now sits on the desk of Escalus.

Shrine in the dark street of Sottoriva

Doge’s Palace, Venice, home to the master of Escalus.