The Flood is my first Italian novel in a while. Published by Severn House (and by them in October in the US) it’s not part of the Costa series though, like those books, it’s very much set in an atmosphere of art and history, in this case in the city of Florence.

It’s a departure from my usual habit of setting stories over narrow time periods. The book begins in Rome in 1942, where a young Jewish boy is about to be smuggled out of the city to escape the authorities. Later it moves between Florence in 1966 and the same city twenty years later. In that last, most prominent period, an ailing and eccentric Carabinieri maresciallo, Pino Fratelli, finds himself with an interesting and awkward English lodger, Julia Wellbeloved. Julia is fleeing a failed marriage and trying to find a new life as a student of art. Pino… well, we’re not quite sure what he’s up to.

There’s an attack on some real-life works of art in the Brancacci Chapel. Pino thinks they are much more serious than the authorities seem to realise, and draws Julia into the search for the truth behind them. Cue our entry into the history of Florence, a bloody and hedonistic heritage that has worked its way down to the present day.

Key to the narrative is a section set in 1966 when the city was devastated by an appalling flood, one which cost lives and changed its face in ways which are still visible today.

Where did this story come from? The same place as most of my work. From mooching round the real-life Florence and thinking what kind of tales might lie behind its ancient and, in the case of this Tuscan city, rather forbidding stones. Some of the things I noted at the time…

I was part way through this book, in Florence on another bout of research, when the email came through asking me to write the adaptations of The Killing. This was an offer too good to resist. So I put Pino and Julia to one side and headed for Copenhagen, and almost three years spent in the company of Sarah Lund.

After that I looked at The Flood again and decided to finish it. The book first came out in audio, narrated impeccably as ever by Saul Reichlin. The Times said of it, ‘The pace is leisurely at first: two small boys separately traumatised in childhood, an ailing retired detective combining forces with an attractive English art historian to solve a mysterious assault on the famous Adam and Eve fresco in the Brancacci Chapel, Florence. But soon historic floods, gruesome murders, orgies, corruption on high and the Red Brigade are skilfully knitted together with abused Renaissance works of art into an accumulation of dread that will have you shrieking, “Don’t go there” to our heroine. She does, of course — and you can’t skip to the end to lessen the tension.’

But I always wanted it to be a book too, so here it is, somewhat revised from the audio version thanks to those splendid editors at Severn House. Florence is a rich, dark mysterious place, and I very much wanted this story to reflect that. In a way it’s a portrait of this extraordinary city, a tale in which Pino and Julia find themselves swept up by its history and culture until the heavy weight of the past threatens to drown them, much as the flood of 1966 swept over Florence itself, and took something very precious from Pino.

I hope you enjoy it. And perhaps one day I’ll be back in Florence trying to work out what happened to this unusual pair. Here are a few of the photos I took while researching this book. If you’re headed for Florence makes sure you look out for the famous tripe stall. 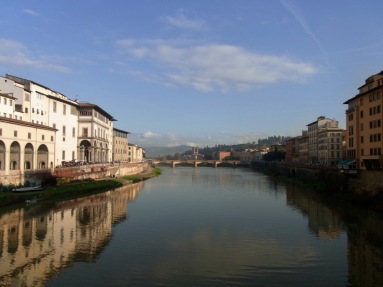 Tripe in the market

Duomo from a distance 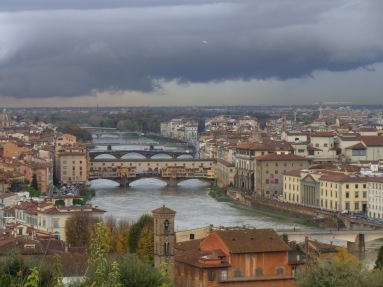 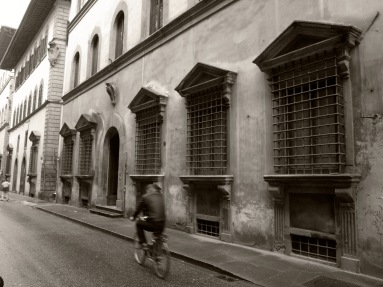